We started the way of Fisterra in the cathedral down Rua das Hortas, among the Hostal de los Reyes Catholics and the manor of Raxoi (town hall). Das Hortas prolongs the cavalcade Campo das Hortas and after a crosswalk left the bar to the left continue straight by the cavalcade do Cruceiro do Galo, who renamed Poza de Bar and San Lourenzo later.

Following the track we come to Sarela da Baixo. In the landmark turn right this road will lead us to Moas de Abaixo. We continue along Carballal to Quintáns where first turn left and just after the bus stop right following the paths between the houses of the place and got a straight paved until the bridge over the Roxos river after walking a little more arrived Alto do Vento, in concello Ames.

We went down to the right towards Ventosa that we reached the road we left momentarily to reach Lombao. Continuing along the road to Augapesada. At last we leave the road and down through the bridge over the rego two steps. It is advisable to rest here as the next rise is very hilly. Cross the road and begins to Carballo.

After a kilometer and a half up the hill to land at the height of the water tank out to the road where the gap is smaller. We arrive at Carballo, the highest population of this stretch, and begin the long-awaited descent until Tambre's River.

This river separates Ames - Negreira. On this side of the river we find the beautiful medieval bridge known as A Ponte Vella. Across the bridge is the chapel of San Brais. To the right of the bridge we see the manor of Baladrón built in the mid-twentieth century.

After Ponte Maceira continue along road passing under A Ponte Nova and finally we find the road. A few meters later we cross to Barca and past the place we cross the road up the left until A Chancela, this road has a lot of traffic and we must be careful when crossing twice.

The route continues straight to enter Negreira where he finished the first stage of the pilgrimage to Fisterra. 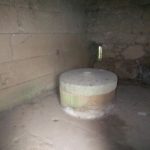